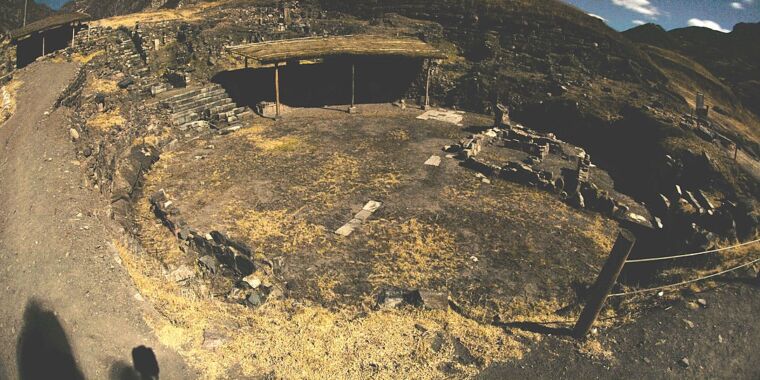 Years After Finding It, Archaeologists Enter A Chamber Under A Peruvian Temple

Today, the temples, canals and plazas of Chavín de Huántar are mostly in ruins. But the site (about 250 kilometers north of Lima, Peru) was once the heart of the Chavín culture, a civilization that flourished in the central Andes centuries before the rise of the Inca Empire. Its oldest granite and limestone temples date back to around 1200 BCE, but people have lived at the site for much longer, since at least 3000 BCE.

Even after the power of the Chavín culture disappeared, members of the Huaraz group used stones from ancient temples to build a village in an abandoned square. People lived in Chavín de Huántar until the 1940s. The place had a long enough life that for thousands of years even the people who lived there lost track of some of its secrets.

Archaeologists have rediscovered one of these secrets by accident: a narrow conduit leading to a small ritual chamber eight meters below one of the site’s temples. Based on the style of its architecture, the Hidden Chamber may be older than any other building or tunnel on the site.

“I put a date of 3,000 years, but I think I’m conservative, and it may be even older,” said Stanford University archaeologist John Rick, director of the research program. and Chavín de Huantar Archaeological Conservation. told the Peruvian newspaper El Comercio.

The chamber’s radiocarbon dating equipment could provide a more accurate answer, but that process could take around six months, according to Rick, who plans to do the work himself instead of sending samples to a lab, like this. is usually done.

A secret chamber “frozen in time”

Rick’s first glimpse of the chamber – now dubbed the Condor Gallery – came via a robotic camera he had carefully lowered into the 40 centimeter wide conduit located in a passage between two temples. Archaeologists had excavated the passageway in 2012 when they found the conduit, but they didn’t have a chance to investigate with the robotic camera until 2019. In the video, Rick could just make out the dark outlines of a small room with a blur. object sitting in the center of the ground.

The duct probably once provided ventilation for the small bedroom, according to Rick. He suggests that the chamber may have originally been a shallow stone-lined pit where small groups of people could gather for rituals. Later renovations added a roof and walls. But eventually, later construction completely covered the chamber and its small ventilation shaft.

“So the Condor Gallery, as we call it, was frozen in time – no one came in anymore,” he said.

It took archaeologists more than a year to find a way to enter without damaging the gallery or the temple above. But earlier this month, Rick slipped through a narrow opening and found himself standing, hunched over, in a room 1.5 meters wide and two meters long.

“There’s enough space for a very small group to sit on stools, and we’ll probably find a hearth as well because those early temples had a fire cult,” Rick said.

In the center of the room was the object he had seen through the robotic camera: a heavy stone bowl. Its handles have been carved into the shapes of an Andean condor’s head and tail, while the bird’s wings curve along the sides of the bowl. The ornate bowl gave the room its name, the Condor Gallery, and it provided another clue to the room’s age.

The realistic style of the carving resembled earlier art from other sites, such as Caral, the 5,000-year-old seat of a city-building culture even older than the Chavín. Later art, including the animals and geometric patterns that adorn the walls of Chavín de Huántar temples, tended to be more stylized. This, together with the architecture of the chamber—which was unlike anything else in Chavín de Huántar—suggested that the chamber was older than anything that had been built on the site.

“All of this suggests that we’re talking about a connection to the past, with more quirky sites like Caral,” Rick said.

The Condor Gallery is not the first underground architecture that archaeologists have discovered in Chavín de Huántar. The network of underground passages beneath the temples inspired a hostage rescue operation in 1997, Operation Chavín de Huántar. Members of a rebel group called the Túpac Amaru Revolutionary Movement had taken several hundred hostages at the residence of the Japanese ambassador in Lima. Peruvian special forces used tunnels dug in nearby buildings to gain access to the ambassador’s residence.

Two decades later, in 2018, Rick and his colleagues rediscovered 35 more tunnels under the site.

The building project that finally cut off the Condor Gallery from the world probably happened long before 500 BCE. At this time, the political power of the Chavín culture declined and the site fell into disuse, at least as a major religious center. The inhabitants have built a village on one of the large squares, borrowing granite and limestone from the temple walls to build their houses. They may have known some of the tunnels and canals under their feet, but it is unlikely that they knew of the Condor Gallery.

Your money: Should you buy a house now?

Monkeypox: is it worth worrying about? – Texas Signal