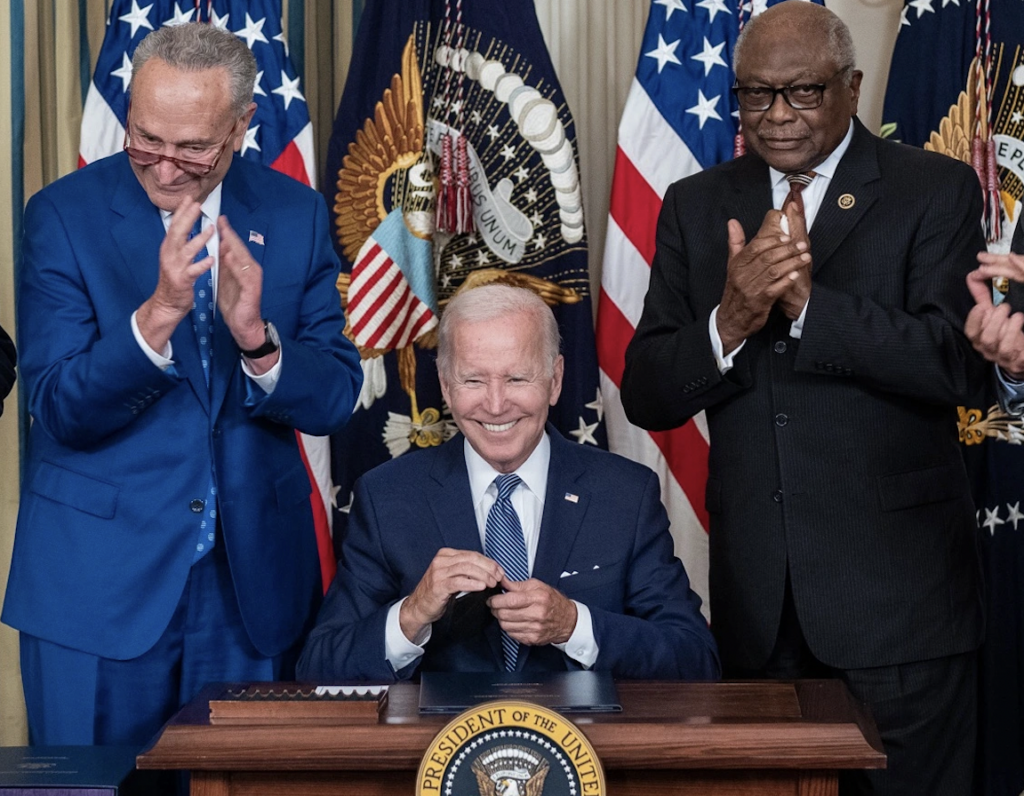 What happened to the “Inflation Reduction Act?” – Inside Sources

NBC News released a new poll on Sunday that found 74% of Americans think the country is on the wrong track — the highest number in its survey history.

It also found that while President Joe Biden’s approval had risen to 42%, his disapproval had also increased to 55%. Not a big number for Democrats with just 80 days to go until the midterm elections.

National experts say recent legislative achievements by Biden and the Democratic majority will help turn things around for the party. They plan to spend 10 million dollars marketing their most recent legislation, the $739 billion…. Something to act.

When Sen. Joe Manchin and Majority Leader Sen. Chuck Schumer revealed the legislative agreement they had negotiated in secret, they called it the “Cutting Inflation Act.” But when NBC News Pollsters asked voters about it last week, here’s the language they used:

“Democrats recently passed legislation backed by President Joe Biden that addresses health care and prescription drug prices, climate change, taxes for businesses and the federal budget deficit. Do you think that was a good or a bad idea? »

It’s not just NBC. The New York Times’ the cover featured the headline, “What’s in the Climate, Tax and Healthcare Package?” At RPSN it was “Biden signs climate change, health care and tax bill”. The Tuning Monitor had a similar headline: “Biden Signs Massive Climate and Health Care Legislation.”

Inflation? Hardly a mention, except to note that independent analysts like the Congressional Budget Office and the Wharton School say the new law won’t have a significant impact.

As Kiplinger reports“Despite its name, the main goals of the Cut Inflation Act are really to fight climate change and reduce health care costs.”

Now that the bill has passed, both senators have dropped the “fighting inflation” claims. Now they are celebrate grants because the purchase of electric vehicles and heat pumps will eventually reduce the energy bills of individual families and therefore, for them, it is a drop in inflation.

For example, Energy Secretary Jennifer Granholm on Sunday touted that the new law allows middle-income families to “get 30% off the price of solar panels… Next year, get rebates on appliances and equipment that will help you reduce your monthly energy bill by up to 30%.It’s about reducing costs for people.

Except that’s not the case. First, families struggling with rising prices have to shell out hundreds or thousands of dollars up front to get the “savings”. Plus, spending nearly $400 billion on rebates to weatherproof a home or buy energy-efficient appliances could potentially save some people money (they still have to buy the electric vehicle or the washing machine at advance). But creating more customers for fewer goods is likely to create upward pressure on prices for the wider economy, experts say.

As InsideEVs reported in June, the average cost of an electric vehicle had already risen to $54,000 before the law formerly known as “inflation reduction” was passed by Congress. This was partly due to supply chain issues and inventory shortages, which is not expected to change next year. And, they added, “rising demand is almost certain to push prices up as well.”

Supporters of the $739 billion bill also shifted the conversation to the provisions of the health care law. For example, Obamacare grants given “temporarily” to families earning up to $300,000 a year were set to expire. The new law extends these subsidies for three more years, at a cost of around $25 billion a year.

That’s another $25 billion in federal dollars in an economy that’s already showing 8.5% inflation. Another great deal for six-figure earning families getting the free money, but how will that price pressure ease overall?

The question facing Democrats is how voters will react to the law once they learn the details. The first indicators are not good. The NBC News poll asked what impact voters thought the new law, whatever it was called, would have on them personally.

Jagan to meet PM Modi on funds and politics