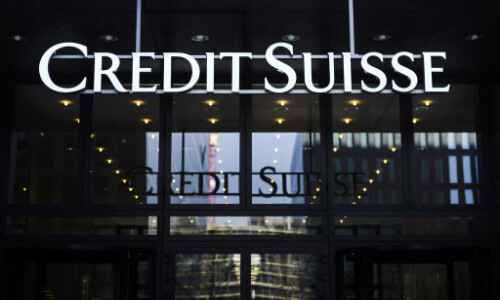 Judging by the latest earnings numbers, banks are operating more efficiently than they have in years. But the sector could soon be heading for difficult ground, notably Credit Suisse.

Banks in Europe are mostly operating well at a steady pace and with relatively full reservoirs. This is evident from the capital buffers which, according to UBS financial analysts, are more than sufficient to withstand an impending increase in borrowing costs. In an industry analysis, they point to government credit guarantees and tax interventions, which act as the proverbial airbags.

In addition, the study under the direction of Jason Napier sees further increases in earnings before provisions, concluding that banks are reasonably valued from an investor’s perspective at 5.8 times normalized earnings.

There was no particular sign in the second-quarter figures that banks are bracing for particular headwinds such as recessionary credit risks or energy risks, analysts observed.

But analysts have raised some question marks over Credit Suisse, saying it is unclear what guiding principles will be used to steer the hobbled bank. In the past, the link between investment banking and asset management has always been at the heart of the institution.

But with the announced downsizing of the investment bank, UBS experts believe new focal points should emerge, in areas such as digitization, back and mid-office or asset management. But a high, inflexible bonus structure limits the institute’s maneuverability, they say. Given this scenario, UBS maintains its “Neutral” position on Credit Suisse with a price target of 5.40 francs ($5.55).

After years of sluggishness, the transformation programs in Europe for greater efficiency are bearing fruit overall. According to a study by Bearingpoint, European banks achieved an average cost-income ratio (CIR) of 62%, the best figure since 2013.

Scandinavian banks achieved the best results with a CIR of 49.1%, while German institutions brought up the rear with 70.4%. This is to some extent explained by the high costs of restructuring programs in some establishments. German banks also ranked last in the comparison in terms of return on equity, which averaged 4.5%.

According to the authors, the main drivers of improved efficiency were not only the extensive transformation and digitalization programs, but also a stable income situation during the pandemic. As the dreaded wave of bankruptcies did not materialize, many institutions were able to release a large part of the provisions made for this purpose. Thanks to this progress, European banks were able to report their highest profits since the start of the analysis in 2018.

In the study, Bearingpoint analyzed the financial statements of 122 European banks from 2013 to 2021 which are supervised by the ECB or national regulators. The dataset covered around 70% of the total aggregate assets of all financial institutions in the EU.

The team provides an update on the crisis planning of the MPS | News, Sports, Jobs

Dividend Investors: Don’t Be Too Quick To Buy Power Root Berhad (KLSE:PWROOT) For Its Upcoming Dividend