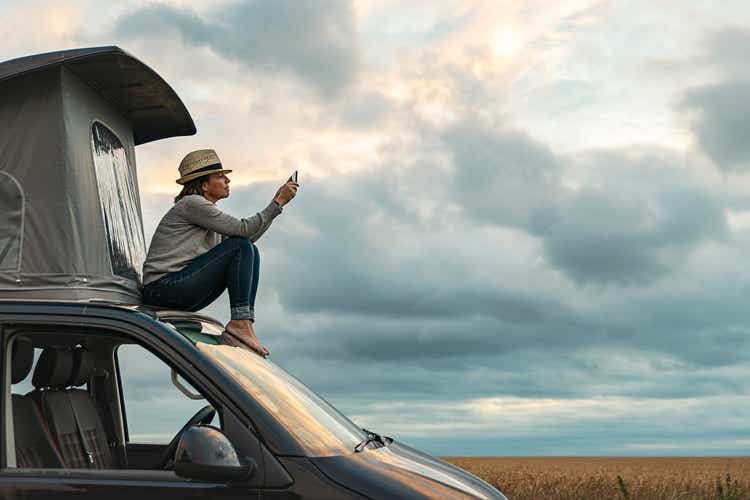 The calm before the storm? | Looking for Alpha

Stocks do not disappear when sold; someone owns the shares to the bottom. Those owners who refuse to sell because they have convinced themselves that the next dip will be the hoped-for resumption of the uptrend are called “bagholders”.

Trends are tricky. Humans anticipate that current conditions will continue into the future. In economics and finance, we call this continuation a “trend.” Trends continue until something fundamental changes and the trend takes a new course.

If asset prices, credit, sales, jobs, tax receipts and profits are all expanding, we call this trend “up”.

If the economy and asset prices contract, we call it bearish.

People are much happier in uptrends because they make money effortlessly as the assets they own increase in value. They feel richer and so they borrow and spend more money, which promotes expansion.

This self-reinforcing feedback reverses in downtrends as people feel poorer, they borrow and spend less, reducing demand for goods and services.

People don’t like to feel poorer, so downtrends are not favored. The goal of those in power is to reverse any downtrend into an uptrend and extend the uptrend for as long as possible.

But ultimately, every uptrend comes up against limits. People borrow as much as their income can support, and then they borrow more to bet that the value of the assets will continue to rise.

This flow of money pushes assets far beyond their previous value, disconnecting them from the fundamentals of yield, replacement value, etc.

As valuations soar, those who bought the assets are finding that most of their profits are capital gains from the rise in value, not income. They are therefore buying more assets, expecting the trend of soaring valuations to continue more or less indefinitely.

But valuations only rise when demand from buyers exceeds supply from sellers. Once the valuation bubble peaks, sellers who decide to take profits or sell to pay off debt outpace demand from new buyers and valuations fall.

It’s called “the credit cycle” or “the business cycle” but it really is a cycle of human nature: when the gains are easy, we want to increase our gains, so we increase our borrowing, leverage, and risk to buy more assets.

“Investment” becomes pure speculation detached from fundamentals. Eventually valuations, leverage and debt all reach extremes and so valuations, debt and leverage all start to contract.

The euphoria of getting rich effortlessly is replaced by the fear of getting painfully poor, and so buyers turn into sellers.

This becomes a self-reinforcing feedback: as valuations fall, more people decide it’s time to sell. Once valuations have fallen, owners who have bought more stocks with debt are forced to sell on margin calls.

What makes this transition interesting is that humans are reluctant to let go of a trend that has been beneficial to them. The natural tendency is to think/assume/hope that the sinking asset will stop sinking and return to its former uptrend.

During expansive trends, this “buying the downside” – buying more of an asset each time it goes down – is rewarded, as each downturn is brief and the uptrend picks up quickly.

But once the trend has reversed, “buying the dip” is no longer rewarded, it is punished, as valuations continue to fall.

Experienced traders look for evidence of this transition because they have learned the hard way that those who cling to the idea that the uptrend is basically eternal because the powers that be want it to be eternal end up losing most of their wealth.

Inexperienced traders find it hard to believe that effortless gains come to an end, because the majority of traders are still optimistic and the financial media is also optimistic. It’s easy to find compelling reasons to believe that the bullish expansion is simply taking another brief pause.

“I wrote an article for Fortune published in September 2007 that referred to three ‘near certainties’: profit margins would fall, the housing market would crash, and the worldwide risk premium would rise, each with serious consequences. You can only possibly have that degree of confidence if you have consulted the history books as much as we have and examined every bubble and every bust. We have found that there are no exceptions. We We have up to 34 completed bubbles. Each of them has broken up to the trend that existed before the bubble formed, which is a very strict standard.”

Grantham sees the current bubble as three simultaneous bubbles overlapping into a super-bubble. The US stock, bond and housing markets are all standard deviations from their historical average. Grantham says there have only been four superbubbles in history: in the United States in 1929, 2000 and 2006, and in Japan in 1989.

I titled this exploration of the trend “calm before the storm” because the transition from bullish expansion to bearish collapse is ultimately an internal battle within the bulls hoping for a quick return to effortless gains.

They have plenty of reasons to want the rally to resume, and few reasons to voluntarily accept that holding on to the assets that brought them so much money will now only diminish their wealth.

This arm wrestling is generally calm. The storm begins when the “vital” first sellers (4% of owners, if the Pareto distribution holds) prompt 20% of owners to start selling. This avalanche of sales – the storm – triggers behavioral changes in the 80%.

Stocks do not disappear when sold; someone owns the shares to the bottom. Those owners who refuse to sell because they have convinced themselves that the next dip will be the hoped-for resumption of the uptrend are called “bagholders”. Every experienced trader has been a bagholder. The reasons and the psychology are always the same: we are reluctant to let go of uptrends and we believe that a long-term trend change is unlikely.

Perhaps the trend is still bullish and will never be broken by the storm of a trend change. But maybe the trend has already changed and storm clouds are gathering just on the horizon.

Editor’s note: The summary bullet points for this article were chosen by the Seeking Alpha editors.