REC primarily provides financial assistance (loans) to state power boards, state governments, central/state electric utilities, independent power producers, rural electric cooperatives, and utilities in the private sector through its extensive network of 22 offices across the country. Over 90% of REC’s loan portfolio is made up of (sovereign) government borrowers, with no NPAs; i.e., REC is almost considered a government-sponsored risk-free NBFC in the power industry. REC also benefited from the issuance of capital gains and tax-exempt bonds which accounted for 11% of its borrowings. The REC is financially self-sufficient and has not required financial support from the government.

The different types of projects funded by REC are as follows:

Working capital requirements for purposes such as purchase of fuel for power plant, purchase of electricity, purchase of minor machinery and equipment, system and network maintenance, including repair of transformers, etc.

REC is a significant entity of the Federal Government of India due to its strategic role in supporting the country’s electricity sector and is considered to be consistently important (too big to fall). REC was established in 1969 and is a Non-Banking Financial Company (NBFC) registered with the RBI. REC is responsible for lending to the electricity sector; mainly to public sector borrowers, where it has no NPA. REC is indirectly 52.63% owned by the Government of India (GOI), through Power Finance Corporation Ltd (NS:); the two companies remain operationally independent but controlled by the GOI/MOP.

REC plays an important policy role in financing the power sector, in 27 states and three Union Territories (UT) in India. The company was also mandated as a nodal agency to carry out government initiatives and power reforms. REC financing in the power sector value chain is essential to avoid a dislocation of liquidity, especially to weak distribution companies. REC and PFC may find it difficult to substitute each other’s roles, given the interconnected shareholding structure and the fact that the two companies are of similar size. Due to the cancellation of the government entity, REC enjoys the highest national rating (AAA) and a lower cost of borrowing.

REC is also a victim of the partial COVID lockdown/restrictions and resulting disruption to the industrial/power sector. In FY21, it reported Core Operating EPS of 66.92 compared to FY2020 of 39.87. Based on the current quarterly run rate, Core Operating EPS could grow at least +20% in FY22 to reach 80.30. Further assuming a stable growth rate of around +20% (CAGR) over the next few years and considering an average PE of 3, the fair value of the REC could be around 268-321-385 and 463 for FY:22-25. The average base operating PE of 3 is very low, considering it is a PSU entity.

Looking forward, India’s power demand could grow many-fold as the economy is expected to grow above trend post-COVID. India enjoys an emerging market scarcity premium for political, political and macro/currency stability. With the lure of Modinomics and 5D (democracy, demography, demand, deregulation and digitalization) coupled with the mantra of “reform and perform”, India is now a prime destination for FDI. India could be a major global supply chain, providing an alternative to China if it plans and implements proper innovation-driven policies.

So, India’s potential is huge if policy makers do the right thing. REC, as the NBFC of the power sector, is also expected to grow along with the Indian economy. And the green transition should also bring new development opportunities for REC. Recently, REC and PFC reduced their lending rate for renewable energy projects from -0.40% to +8.25%.

REC and PFC can now bid on distressed private power projects to avoid large loan discounts during the resolution process and consider joint venture with other central power sector entities for know-how technique necessary for the management of acquired private energy projects. REC and PFC can also launch a consortium of state-run power lenders and developers to acquire and operate these troubled power projects.

According to reports, PFC and REC have also discussed the possibility of setting up an asset management company (AMC) to take over viable projects through a tender or change of management path. However, this plan has now been abandoned. REC had in 2018, in the midst of the Great Stressed Asset Crisis, offered Power Asset Revival through Warehousing and Rehabilitation, or ‘Pariwartan’, to the warehouse of around 20,000 MW of stressed projects under an AMC to protect their value and prevent distress selling. But this plan was later abandoned. As various stressed energy projects by the private sector owe a lot to PSU banks, the government is using PFC and REC to solve the same problem.

At the end of the line :

RECS is a long-term low-beta investment certificate and virtually risk-free government NBFC, primarily funding state-backed energy projects; that is, most of its loans (about 90%) are guaranteed by the state, will never default.

Outlook and valuation of REC:

Given the quarterly and annual average execution rate, stable nature of core operating income growth, risk-free business model (most borrowers are government entities), and government pressure on the infra/power/RE sector, REC may be able to continue growing its loans and expanding the NII margin. All loans are serviced regularly and the net NPA decreased to 1.52% in September 21 from 2.04% in September 20, with zero NPA in the public sector. 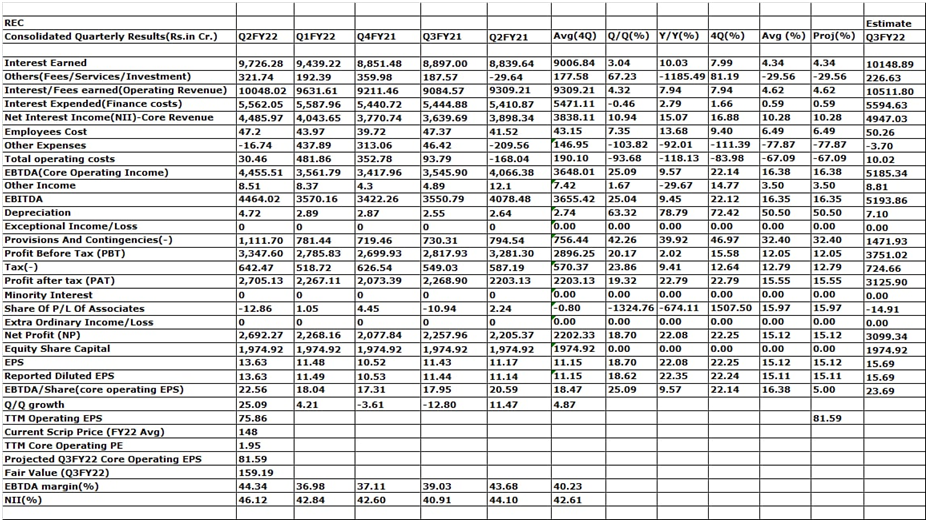 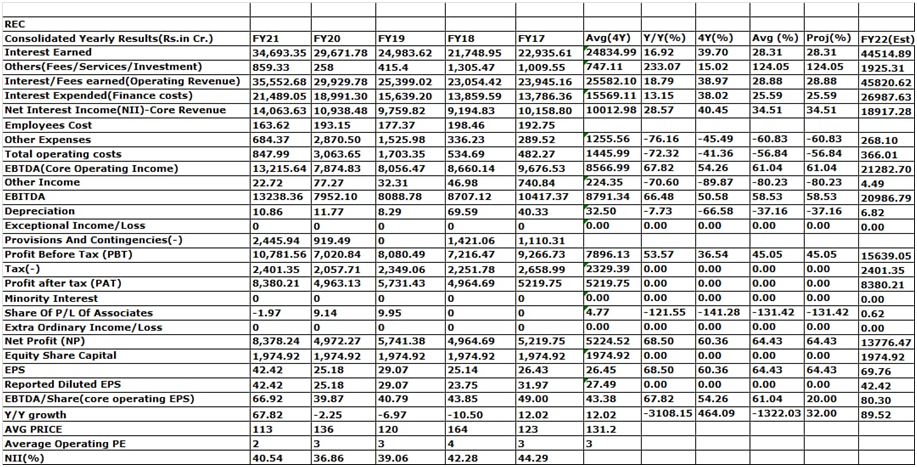