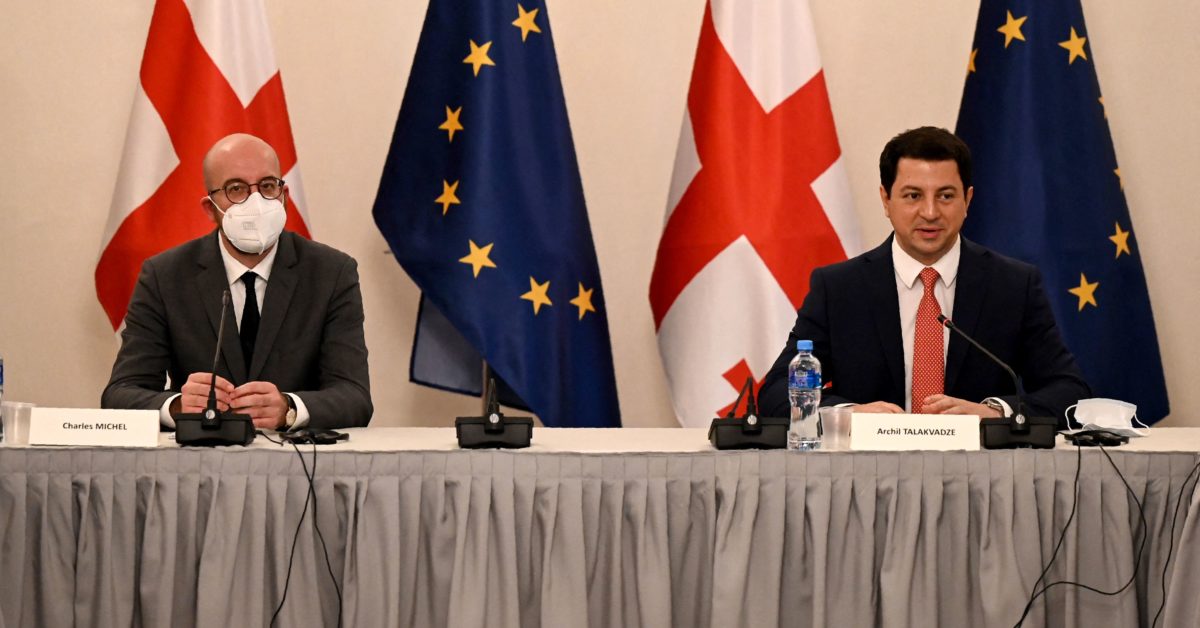 Press play to listen to this article

Salome Samadashvili is a Georgian MP, vice-chair of the Lelo – Partnership for Georgia faction and former head of the Georgian mission to the European Union.

Earlier this week, 36-year-old journalist and cameraman Lekso Lashkarava was sent on his final trip to applause and tears from family, colleagues, friends and hundreds of Georgian citizens.

He was one of 53 media representatives – journalists, cameramen and photographers – assaulted by violent crowds of ultra-conservative groups close to Russia, during an anti-pride event the previous week. Protecting his colleague from the crowd, Lekso was brutally beaten, his bones broken.

The crowd’s goal was to thwart an LGBTQ + pride event on July 5 in Tbilisi. It succeeded. The pride did not take place that day. Rather, it turned into a day of shame, as crowds chased journalists and activists through the streets and burned the European flag.

The events of July 5 represent a flagrant failure of the ruling Georgian Dream (GD) party. Intentionally or not, the police forces mobilized to defend the participants in the pride were far from sufficient. And instead of ensuring the safety of citizens, Prime Minister Irakli Garibashvili and other GD officials accused political opponents of conspiring with LGBTQ + activists and said the political opposition was an “anti-Georgian force.” And “anti-Christian”.

Borrowing from the playbook of illiberal regimes and mirroring Russian propaganda methods by linking opponents to marginalized groups and fueling hatred, the ruling party has indirectly supported this violence. In recent years, the party has also created a stimulating environment for similar groups and their leaders, who organize violence.

Outraged by recent events, many Georgians have taken to the streets to defend their European future. They demand the resignation of Garibashvili and his government. The violence against the media shocked them. Many believe it was tolerated by the government to create an atmosphere of fear in the run-up to the October local elections.

The prolonged political crisis in Georgia, following the last parliamentary elections in October 2020, ended with the political agreement negotiated by European Council President Charles Michel. At least that’s what it appeared, when I left the United National Movement, Georgia’s largest opposition party, which refused to sign the document.

I have since joined the rest of the political opposition who trusted the agreement negotiated by the EU and signed the document, now known as the â€œMichel Documentâ€, on April 19. The deal included pledges to major electoral and judicial reforms, partition in parliament, an end to politically motivated prosecutions and the way forward to possible early elections next year.

However, its credibility has been tested time and again, as the DG does not appear willing to deliver on its commitments: Despite numerous warnings, the government has made judicial appointments, compromising the independence of the judiciary . Two political prisoners have been released, but trials are still ongoing against several political and media figures. The electoral changes were modest and do not have the support of the opposition.

If the results of the upcoming regional elections in October give the ruling GD party less than 43% of the proportional votes cast, it will be forced under the deal to call an early election in 2022. Undermine the “Document” de Michel â€is in the interest of the DG – if it frees them from this obligation to hold early elections.

The failure of the deal negotiated by the Europeans would also serve Moscow well. This would expose the weakness of the EU as a foreign policy actor and an important player in the region, which Russia sees as its backyard. Appealing to the conservative values â€‹â€‹of Georgians as part of anti-Western propaganda has long been Russia’s hybrid war strategy in our country. Russian media last week applauded the burning of the European flag in Georgia, and Aleksandr Dugin, the Kremlin’s chief ideologist, said the country was finally on the right track.

When Michel began his trip to Moldova and Georgia in March, it was in part a diplomatic response to the treatment of High Representative Josep Borrell in Moscow. And negotiating the political agreement in Georgia was an important objective of this visit. That’s why Russia wants him to fail.

This week, Michel will participate in an international conference organized by the Georgian government in Batumi. He will do well to ask the Prime Minister, whose resignation is the main demand of the demonstrators in Tbilisi, difficult questions. He should also demand, in firm and unequivocal terms, the implementation of the April 19 agreement and remind the Prime Minister that EU aid is not unconditional.

The historic role played by the EU in resolving the political crisis in our country has been widely praised in Georgia, where the majority of citizens are resolutely pro-European. And many would see a failure of the deal as a failure for Europe. As the guardian of the document bearing his name, the President of the European Council must reassure Georgians that they will not be disappointed.