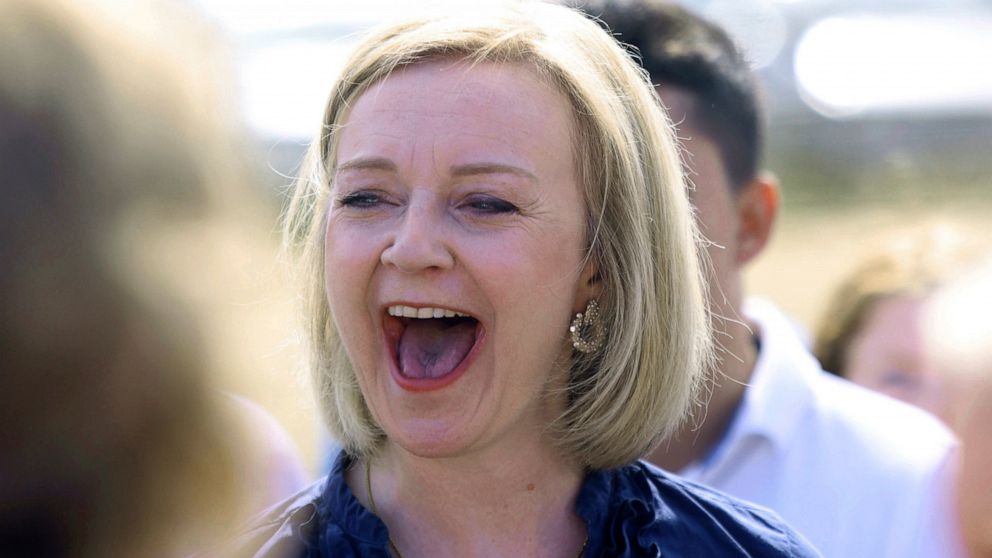 LONDON — The two candidates vying to be Britain’s next prime minister will face off in a televised debate on Monday, after both sought to woo the Conservative Party’s right-wing base by backing a controversial plan to deport some asylum seekers to Rwanda.

Foreign Secretary Liz Truss and former Treasury chief Rishi Sunak are battling to succeed the discredited Boris Johnson as leader of Britain’s ruling party. They were chosen by Tory lawmakers from an initial field of 11 candidates as finalists to replace Johnson, who resigned as party leader on July 7 after months of ethics scandals that sparked a mass exodus of ministers from his government.

The winner will automatically become Prime Minister, governing a country of 67 million people, but will be chosen by around 180,000 Conservative Party members. They will vote over the summer and the result will be announced on September 5. Johnson remains caretaker prime minister until his successor is chosen.

Truss, 46 and 42, Sunak courted conservatives by doubling down on policies meant to appeal to the conservative base. Both back a controversial deal the Johnson government struck with Rwanda to send migrants arriving in Britain in small boats for a one-way trip to the East African nation. Deportees would be allowed to seek asylum in Rwanda, not the UK

The government says the policy will deter human traffickers from sending migrants on dangerous journeys across the English Channel. Political opponents, human rights organizations and even some conservative lawmakers say it’s immoral, illegal and a waste of taxpayers’ money.

The first planned deportation flight was blocked after court rulings last month, and the whole policy is now being challenged in UK courts.

On Sunday, Sunak said “no option should be ruled out” despite questions about the legality and morality of the policy. Truss said she was “determined” to carry out the Rwandan plan and raised the possibility of expanding it to other countries.

Truss also said she would increase the size of the UK Border Force, while Sunak suggested housing asylum seekers on cruise ships.

Hardline policies like the Rwandan plan are less popular with voters as a whole than Conservatives, but the British electorate won’t have a say in the government until the next national election, due by the end of 2024 .

Truss and Sunak have previously clashed over economic policy, with Truss promising immediate tax cuts and Sunak – who has guided Britain’s economy during the coronavirus pandemic – saying he will get inflation under control before cutting taxes. He says borrowing more to cut taxes would be “unethical”.

The leadership election is taking place during a cost of living crisis caused by soaring food and energy prices, in part due to the war in Ukraine. While many countries are experiencing economic turmoil, in Britain it is made worse by the country’s departure from the European Union, which has complicated travel and business relations with the UK’s biggest trading partner. United.

Both Sunak and Truss are strong supporters of Brexit, which was the flagship policy of the Johnson government.

But the two have sparred over topics including China policy, with Truss’ allies accusing Sunak of changing his stance on relations with Beijing. Sunak says China poses the “greatest long-term threat to Britain”, and says if elected he would close all 30 Confucius Institutes in Britain. Funded by the Chinese government, the institutes teach Chinese language and culture, but have been accused of spreading pro-Beijing propaganda.

“Where have you been for the past two years? ” he said.

Bettors say Truss is the heavy favorite to win the leadership. She surpasses Sunak in polls among Conservative members – although Sunak has the edge among voters as a whole.

Sunak also faces hostility from Johnson’s allies, who view him as a renegade for leaving government earlier this month, a move that helped bring down the prime minister. Truss chose to remain in the caretaker government.

Many Tories fear the bitter in-fighting will only benefit the opposition Labor Party. Former party chair Amanda Milling said the contest was “more toxic than I have ever seen”.

Writing on Twitter, she urged both candidates to sign a “clean campaign charter”, saying that without it “the lasting damage to our party could rob us of power for a decade”.

Follow all of AP’s coverage of UK politics at https://apnews.com/hub/boris-johnson

Airdrie House and Home: how interest rates will affect the housing market